Led by Vision Knight Capital, and including participation from Sequoia Capital China Seed Fund, Chuxin Capital, Index Ventures, and Index Capital - this is our second funding round since the May, 2021 Seed round.
01/04/2022by SphereEx

SphereEx, the innovative database software provider, today announced it has closed its Pre-A financing round, and raised nearly 10 million US dollars.

Led by Vision Knight Capital, and including participation from Sequoia Capital China Seed Fund, Chuxin Capital, Index Ventures, and Index Capital - this is our second funding round since the May, 2021 Seed round.

Founded by Apache ShardingSphere's core developer team in April, 2021, SphereEx aims at building a new distributed database infrastructure. In May, it closed a multi-million US dollar Seed funding round led by Sequoia China and Chuxin Capital.

In the digital age, databases, known as an important infrastructure of the digital economy, have become increasingly prominent. Third-party research evaluates the database market size in China will reach RMB 68.8 billion by 2025, creating new opportunities in the database industry.

Since its founding, SphereEx has been an important open source contributor, and has reiterated its commitment to the community and that our future path is closely linked to open source.

Having undergone years of development, Apache ShardingSphere is now one of the Top-Level projects of the Apache Software Foundation, and has gained more than 15,000 GitStars on GitHub, involving over 300 contributors, and has become one of the most popular Big Data open source projects.

##Database Plus: PoC Based on Pluggable Architecture 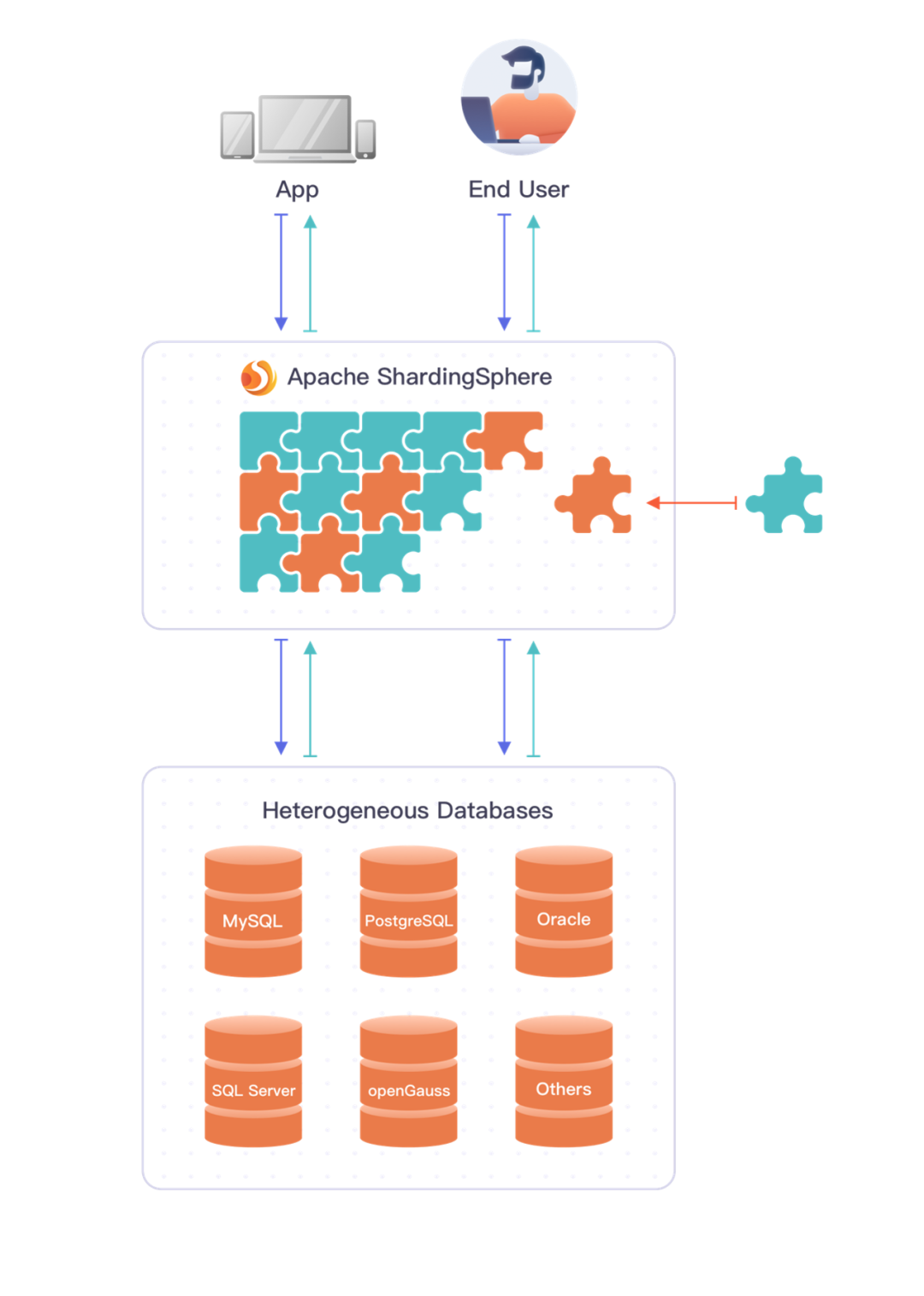 The Apache ShardingSphere 5.0.0 GA supported by SphereEx was released on November 10, 2021, coincidentally marking the 3rd anniversary of ShardingSphere’s entry into the Apache Software Foundation's incubator.

This version marked the debut of the Database Plus concept. Database Plus refers to the standard ecosystem-supporting layer built above fragmented databases, which can also improve computing capability.

All interactions between applications and databases occur at the new standard layer, so the challenges faced by businesses due to underlying databases fragmentation are minimized, resulting in better upper-layer services.

The release also marked the start of Apache ShardingSphere's next development stage: with its pluggable architecture as the core, it evolved from a simple data sharding middleware to a complete ecosystem supporting heterogeneous databases.

SphereEx will continue to optimize its products, and bring innovative solutions to make an impact in the fragmented database industry - by bridging the gap between data and applications, SphereEx can meet the needs of a wide variety of users in various database application scenarios.

SphereEx embraces openness, diversity, and co-creation, and has dedicated significant efforts to attract more developers and users around the world to proactively develop the Apache ShardingSphere community. ShardingSphere opened its source code in 2016, and soon attracted a large number of developers.

It is now used by many listed enterprises, with a community that is expanding rapidly both in China, as well as globally. Currently, over 50% of Apache ShardingSphere's code is contributed by the overall open source community, and all SpherEx's seed customers have been converted from the community.

Given its mature and stable technology, as well as its active community, SphereEx is now in a leading position, and has its products used as a core component of data computing architecture by many enterprises in various production environments covering the Internet, finance, O2O, logistics, and cloud computing fields.

"Our motivation in creating SphereEx was to offer full-time job opportunities for the open source enthusiasts, and to make the community even more open and prosperous. We're also responsible for exploring a good business model for open source projects. SphereEx has greatly improved ShardingSphere's compatibility, performance, and stability. In the future, SphereEx is going to provide services such as cloud subscription and private deployment.”

When it comes to its business strategy, SphereEx prioritizes future cloud development, while at the same time maintaining a strong focus on core features such as horizontal scaling, and expanding associated features such as data encryption. SphereEx's future product matrix will center on multicloud and will be guided by the Database Mesh concept, to develop innovative cloud database products.

In the future, SphereEx will continue to support the open source community, increase its investment in technology development, and expand into global markets.

“Startups in the field of cloud ecosystem and IT infrastructure ecosystem are favored by Vision Knight Capital's Frontier Technology Fund. Open source software is one of the categories in which we invest the most. We have already invested a lot of companies that are seen as important nodes of the ecosystem, including the global open source IoT messaging middleware leader EMQ, hybrid cloud management platform & leading open source software company Fit2Cloud, and PerfMa known as the first Chinese company focusing on IT system stability.

Given that in the data infrastructure sector, with the rise of large-scale and complex data systems, an increasing number of companies around the world change their direction from Single Database to Distributed Database, and then to Cloud Native and multi-source heterogeneous database - we believe that open source software providers will drive the data infrastructure revolution.

Led by Zhang Liang and Pan Juan, most SphereEx employees are core members of ShardingSphere, the Top-Level Database Middleware Project powered by the Apache Software Foundation. We are optimistic about SphereEx's creative concepts such as Database Plus and Database Ecosystem, and we believe that it can lead enterprises to build modern, diversified, cloud native data infrastructure better and faster, and complete their digital transformation.

We are very glad to support the SphereEx team as the lead investor in this round. We think that the company having a global vision, and firmly embracing its cloud hosting business model, will become a pioneer and leader in the world's next-generation IT infrastructure revolution."

Yu Zhenzhen, Partner of Chuxin Capital, said: "In the past six months, we have witnessed the rapid growth of SphereEx. In such short period of time, the team proposed the concept Database Plus and released ShardingSphere 5.0.0 GA. To expand its ecosystem, now ShardingSphere supports both MySQL and PostgreSQL. Additionally, SphereEx in cooperation with database vendors such as Huawei and Enmo Tech are developing commercial databases.

Users in China and abroad from the mature ShardingSphere community, are attracted by SphereEx's products. These are real milestones. Of course, the team's rich experience benefits the development of SphereEx, and they also make great efforts to find the company's right business strategies. The commercial infrastructure product SphereEx has grown stronger so we're so confident about its future."

Wei Wei, Index Capital's Executive Director, said: “Enterprises are facing two challenges, exponential growth of data and increasingly complex IT environments. Enterprises are concerned about how they to deal with more complex and diversified underlying data infrastructure in the future.

SphereEx led by one of the most professional teams in the Chinese database industry, has succeeded in building its open source community and now starts to create its one-stop distributed data service platform based on Database Mesh. It has become the core data stack chosen by well-known enterprises. Index Capital is optimistic about its development, and we'll continue to support SphereEx, because we firmly believe that SphereEx will define new standards of enterprise data services." We Have A New Logo