F6 Automobile Technology is an Internet platform for the automotive aftermarket. It switched to sharding and chose ShardingSphere for its multimillion rows of data.
09/27/2022by SphereEx

F6 Automobile Technology is an Internet platform company focusing on the informatization of the automotive aftermarket.

F6 Automobile Technology is an Internet platform company focusing on the informatization of the automotive aftermarket. It helps automotive repair companies (clients) build their smart management systems to digitally transform the auto aftermarket.

The data of different auto repair companies will certainly be isolated from each other, so theoretically the data can be stored in different tables of different databases. However, fast-growing enterprises face increasing data volume challenges: sometimes total data volume in a single table may approach 10 million or even 100 million entries.

This issue definitely challenges business growth. Moreover, growing enterprises are now also planning to split their systems into many microservices based on domains or business types, and accordingly, different databases are vertically required for different business cases.

Why Did We Need Data Sharding?

Relational databases are bottlenecks when it comes to storage capacity, connection count, and processing capabilities.

First, we always prioritize database performance. When the data volume of a single table reaches tens of millions, and there are a relatively large number of query dimensions, system performance would still prove unsatisfactory even if we added more slave databases and optimize indexes. This meant it was time for us to consider data sharding.

The purpose of data sharding is to reduce database load stress and query time. Additionally, since a single database often has a limited number of connections, when Queries Per Second (QPS) indicator of the database is too high, database sharding is certainly needed to share connection stress.

Second, to ensure availability was another important reason. If unfortunately, an accident occurs in a single database, we’d likely lose all data and further affect all services. Database sharding can minimize risk and the negative impact on business services. Generally, when the data volume of a table is greater than 2GB or the number of data rows is greater than 10 million, not to mention that the data is also growing rapidly, we’d better use data sharding.

There are four common types of data sharding in the industry:

Horizontal table sharding: distribute tables’ data rows into different tables according to some rules in order to decrease the data volume of single tables and optimize query performance. In terms of the database layer, it still faces bottlenecks.

Potential increase in operations and maintenance costs, and troublesome field changes and index creation after data sharding. To fix the issue, users need to deploy Sharding-Proxy that supports heterogeneous languages and is more friendly to DBAs.

Of course, there are similar solutions such as Cobar, Zebra, MTDDL, and TiDB but honestly, we didn’t spend much time researching other solutions, because we decided to use ShardingSphere as we felt it meets the company’s needs.

Based on our company’s business model, we chose Client ID as Sharding Key to ensure that work order data of one client is stored in the same single table of the same client-specific database. Therefore, performance loss caused by multi-table correlated queries is avoided; plus later, even if multi-databases sharding is required, cross-database transactions and cross-database JOIN can be avoided.

Among client ID databases, the type BIGINT(20) applies UID (Unique Identification Number, or we call it “gene” ) to ensure potential database scaling in the future; the last two digits of a client ID are its UID, so according to the double scaling rule, the maximum reaches 64 databases. The values of left bits can be used for table sharding, which can be split into 32 sharding tables.

The last two digits (i.e. 83) are used for database sharding, of which temporary data is only sharded into the library f6xxx, so the remainder is 0. Later, increasing data volume can be expanded to multiple libraries. The remaining value 105450559179996689 is used for table sharding. At first time, it is divided into 32 single tables so the modulo remainders correspond to the specific sharding table subscripts are 0~31. 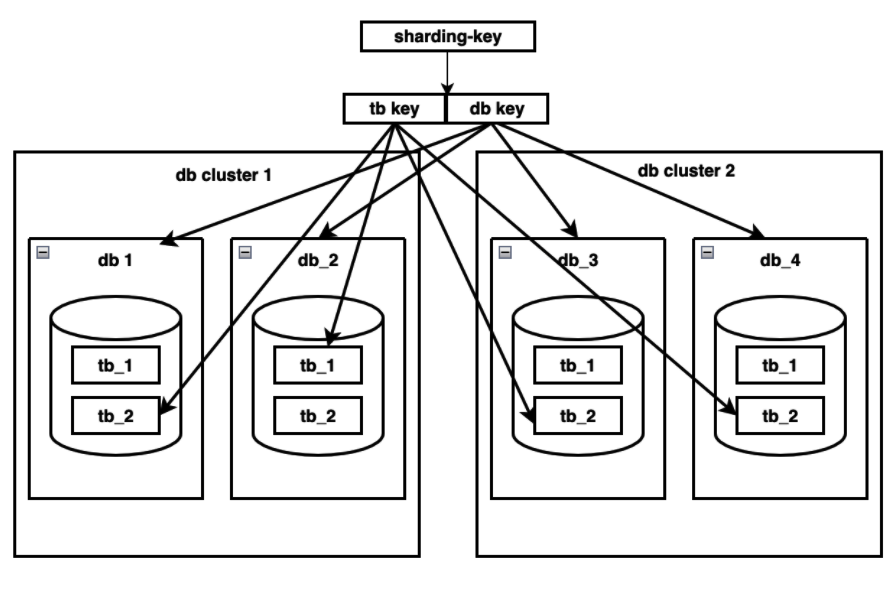 Given that the business system is growing and we adopt rapid iteration method to develop features step by step, we plan to shard tables first and then do database sharding.

Data sharding has a great impact on the system, so we need greyscale release— if unfortunately, an issue occurs, the system can quickly start roll-back, to ensure a functioning business system. The implementation details are given below:

After table sharding, we could no longer use the auto database ID generator anymore, so we had to find a feasible solution. We had two plans:

Plan 1: Use other keys such as snowflake

Plan 2: Implement an incremental component (database or Redis) all by ourselves 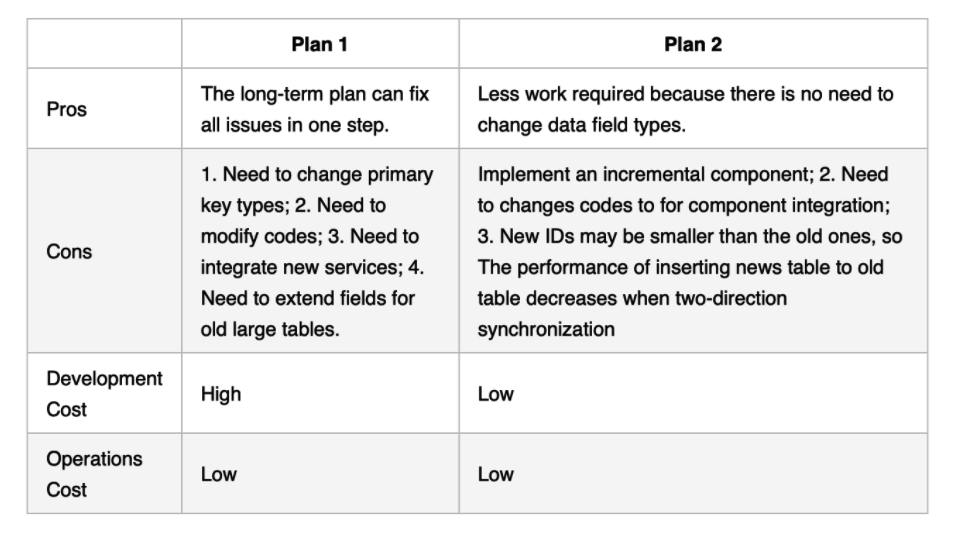 After comparing the two solutions and the business condition, we decided to choose Plan 2 and concurrently, provided a new comprehensive table-level ID generator solution.

- Check whether all requests are carried with shard keys

Now, the microservice traffic entrances include:

After table sharding, to quickly locate data shards, all requests must carry their shard keys.

In order to ensure quick roll-back when problems caused by new feature releases occur, all online modifications are released step by step based on clients. Our grayscale release plan is shown as follows: 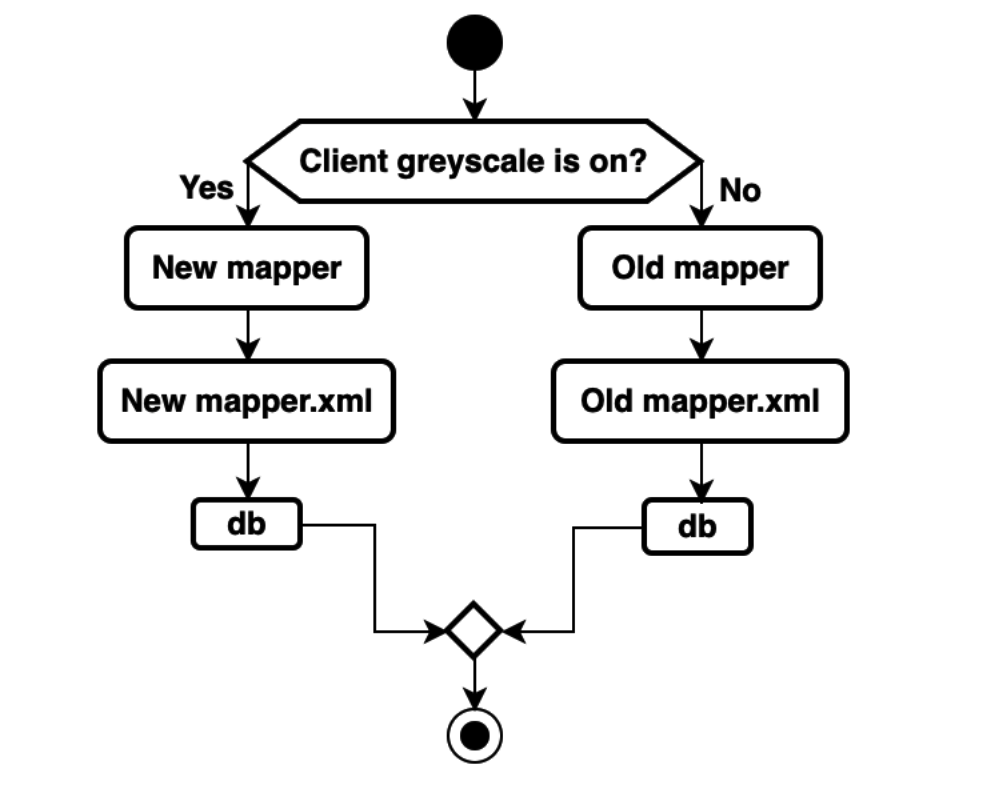 However, the solution causes another problem: all codes visiting the Mapper layer have an if else branch, resulting in major business code changes, potential code intrusion, and harder code maintenance. Therefore, we found another solution and we call it Plan 2.

Plan 2 — Adaptive Mapper Selection Plan: one set of Mapper interface is with two data sources and two sets of implementations. Based on the grayscale configuration, different client requests will go through different Mapper implementations, and one service corresponds to two data sources and two sets of transaction managers, and based on the grayscale configuration, different clients’ requests go to different transaction managers. Accordingly, we leverage multiple Mapper scanners of MyBatis to generate multiple mapperInterfaces, and concurrently generate a mapperInterface for wrapping. The wrapper class supports hintManagerto automatically select mappers; the transaction manager is similar to wrapper class generation. The wrapper class supports hintManager to automatically select various transaction managers to manage transactions. This solution actually avoids intrusion because for codes of the service layer, there is only one Mapper interface. 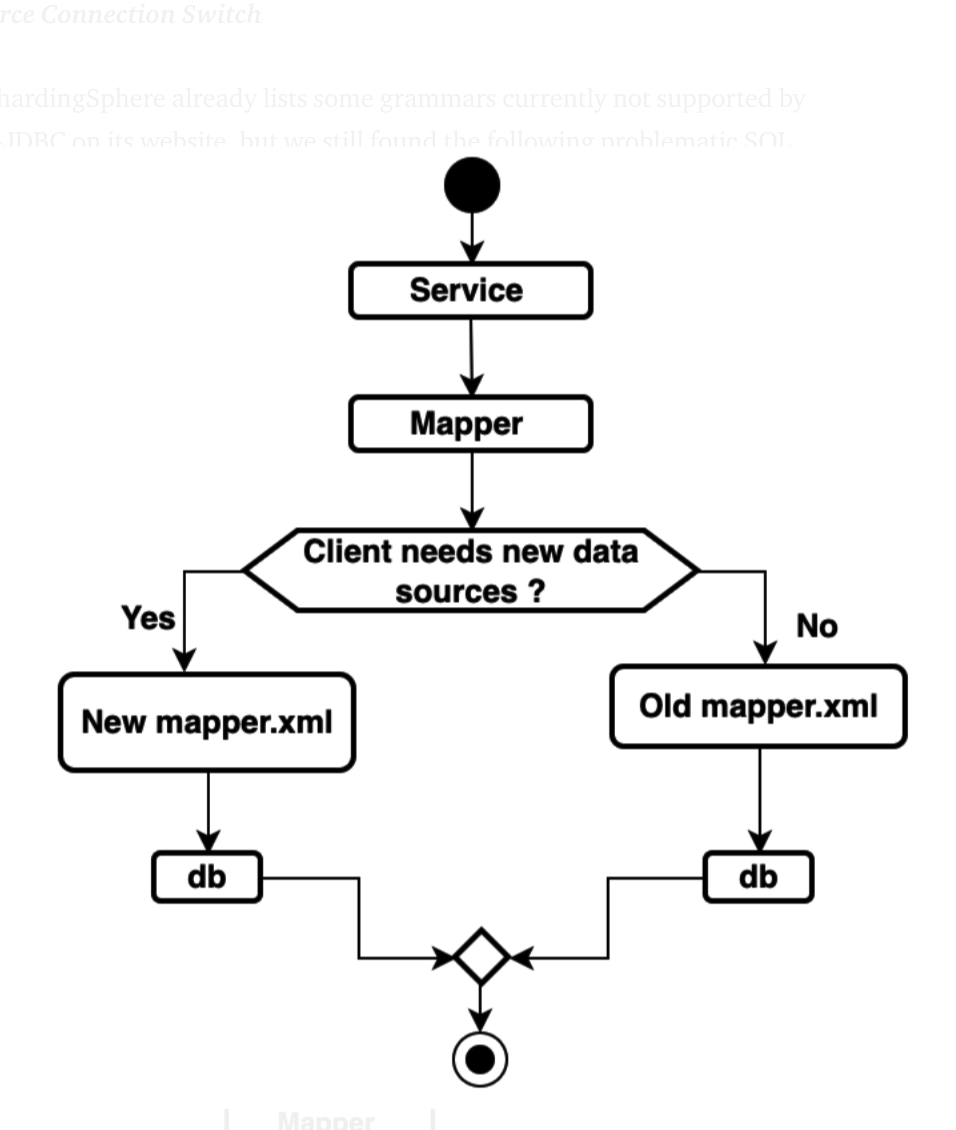 Apache ShardingSphere already lists some grammars currently not supported by Sharding-JDBC on its website, but we still found the following problematic SQL statements that Sharding-JDBC parser cannot handle: 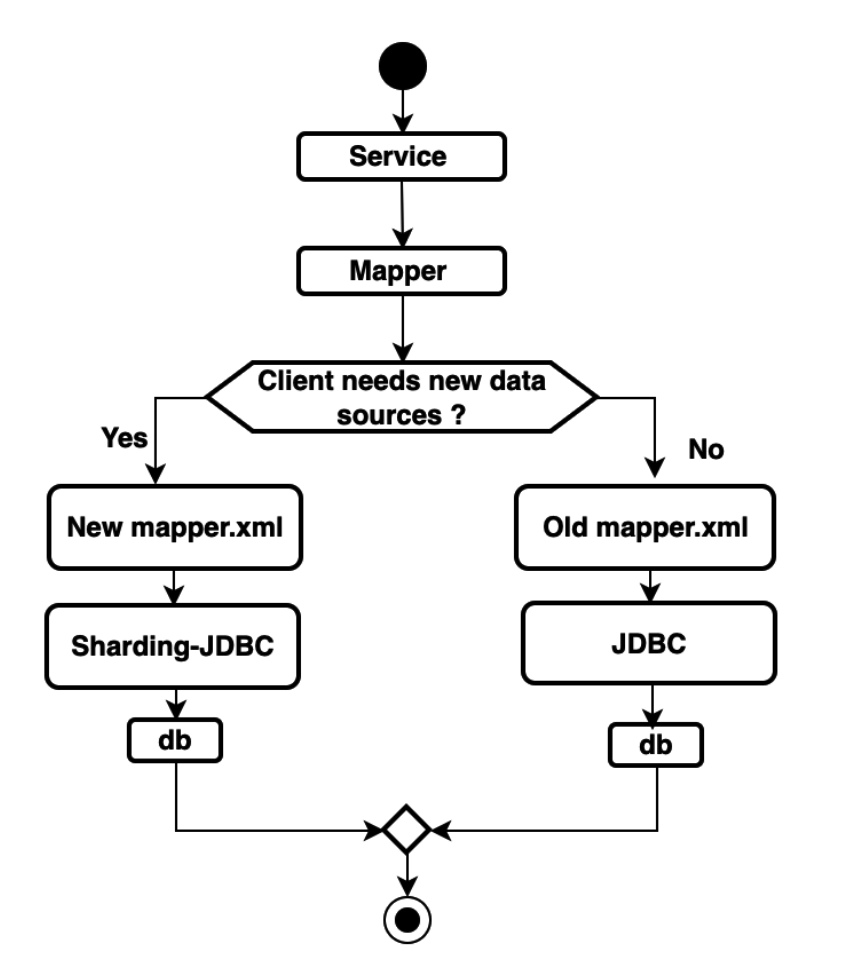 We used another open source distributed database sync project named Otter to synchronize incremental data. Based on database incremental log parsing, otter can synchronize data of MySQL/Oracle databases of the local computer room or the remote computer room. To use Otter, we needed to pay extra attention to the following tips:

Note: the execution results of show master statusof master and slave may be different, so if you set it, you need to get the execution result of the master database. We think this function is really useful because when Otter’s data synchronization fails, we can reset points and synchronize again from the beginning.

Our greyscale switch plan is shown below: 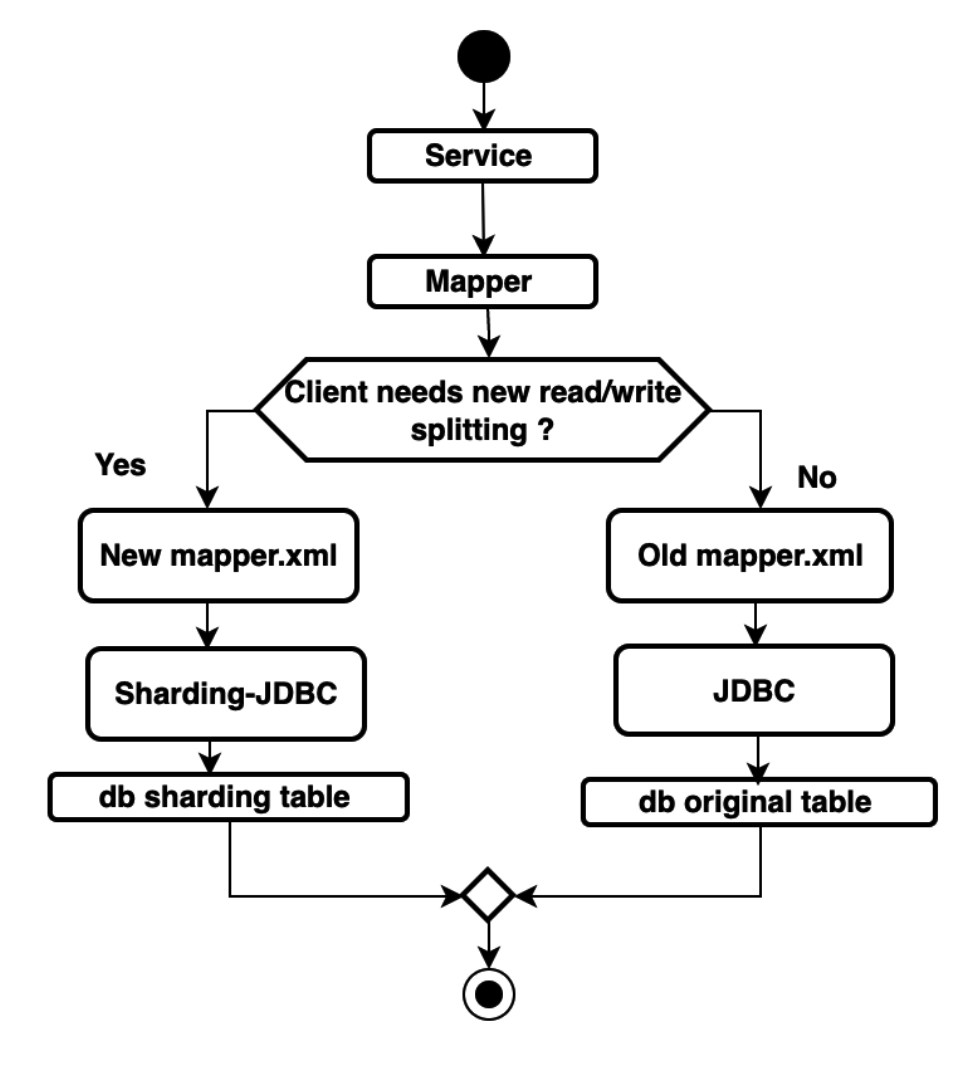 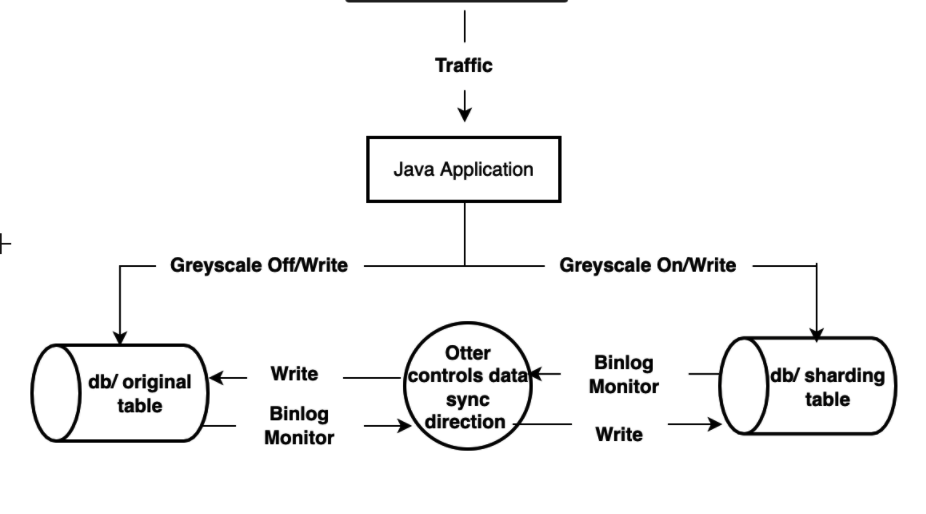 - Storage Procedure, Functions, Trigger and EVENT Try to remove them first if present; if they cannot be removed, create them in advance in new databases. 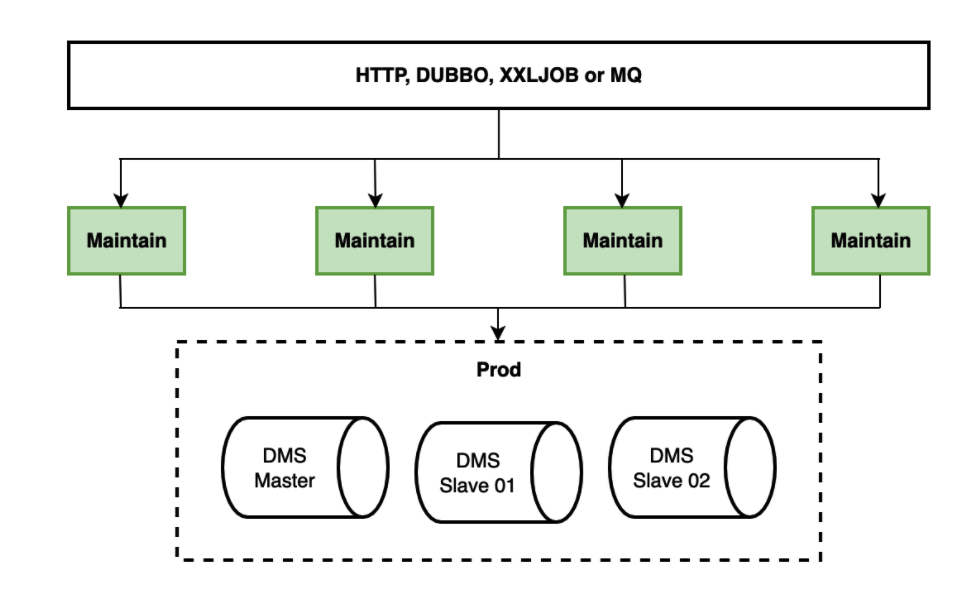 **Step 2:**add three more application instances, and cut 50% of the data to write into rds database 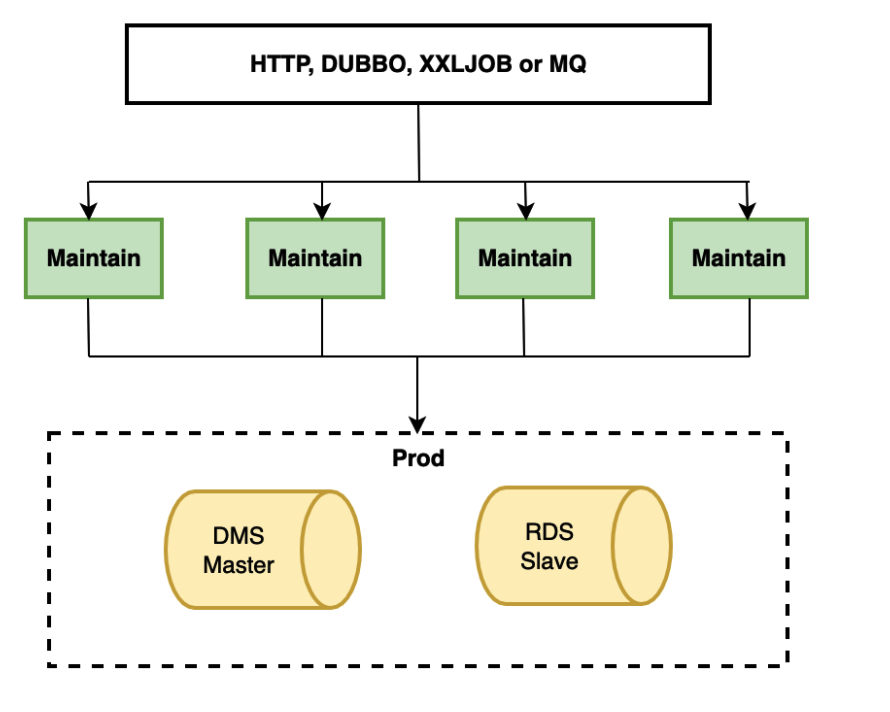 Each step mentioned above can be quickly rolled back through traffic switching so as to ensure the availability and stability of system.

When the performance of a single database reaches a plateau, we can scale out the database by modifying sharding database routing algorithms and migrating data. 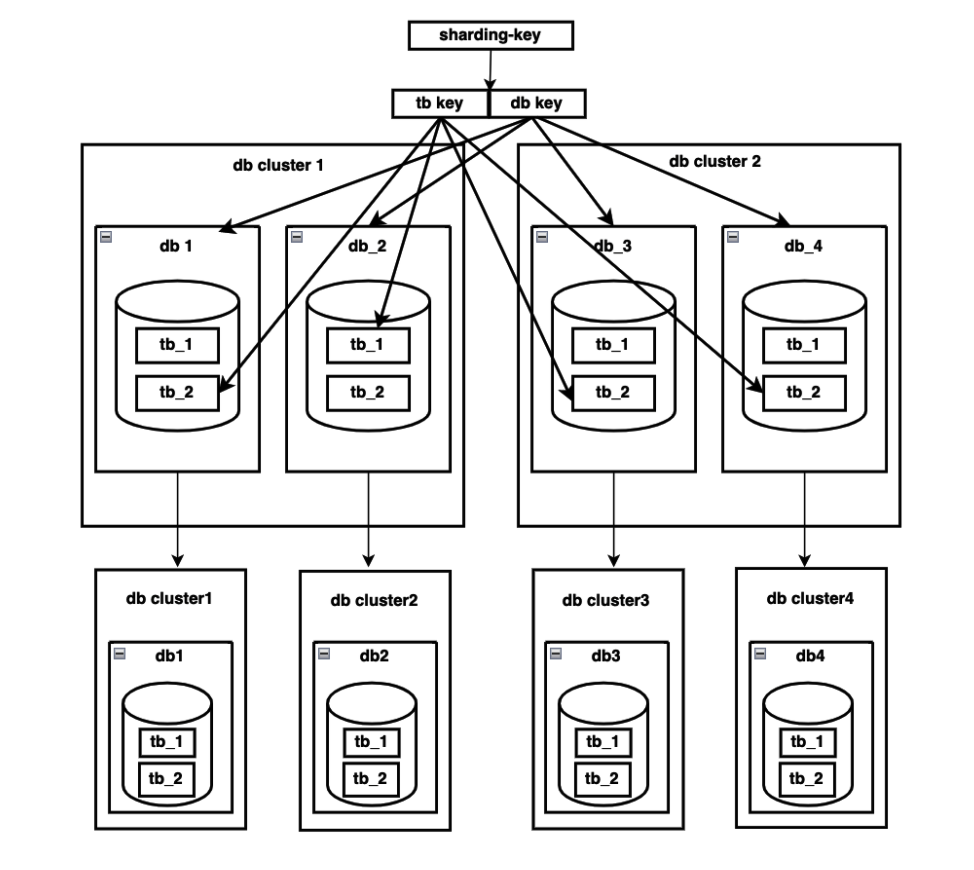 When the capacity of a single table reaches its maximum size, we can scale out the table by modifying sharding table routing algorithms and migrating data. 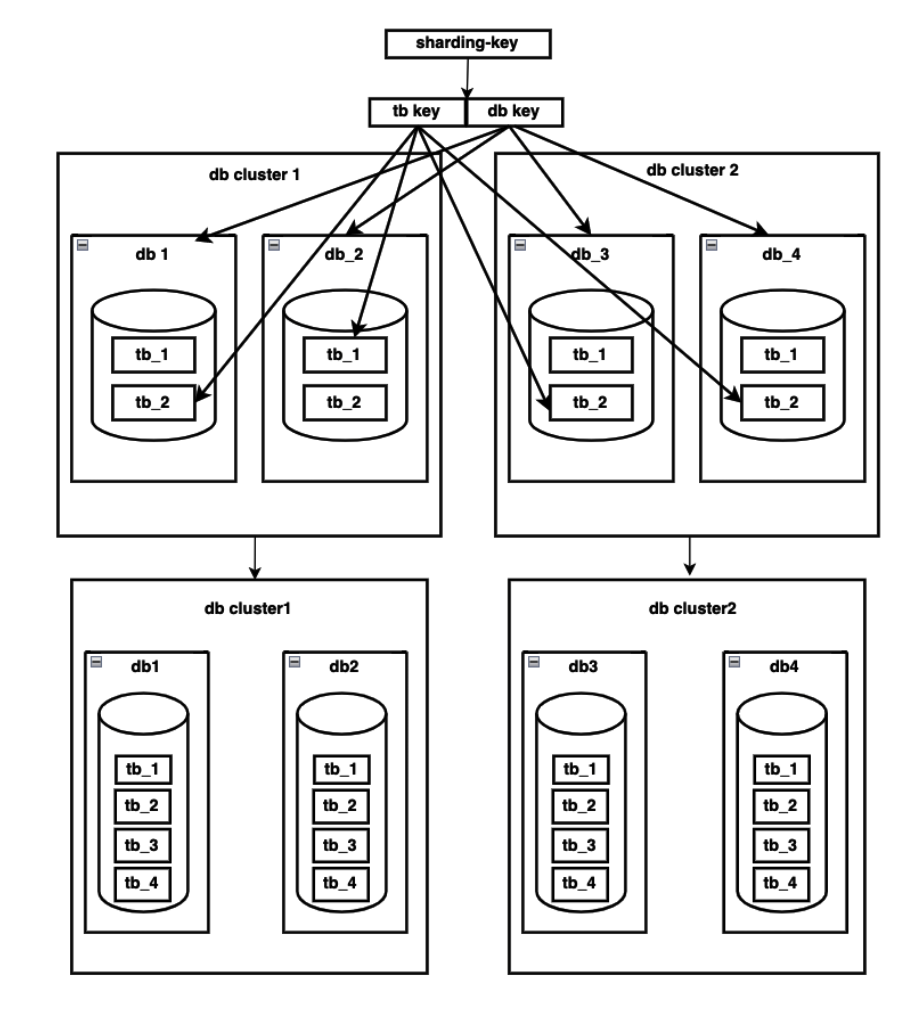 Q: Sometimes, Otter receives binlog data but the data cannot be found in the database?

**A:**To make our MySQL compatible with replicas of other non-transactional engines, we added binlog at the server layer. Binlog can record all engine modification operations, so it can support replication function for all engines. The problem is a potential inconsistency between redo log and binlog but MySQL uses its internal XA mechanism to fix the issue.

Of course, group commit has been added since version 5.6. The development improves I/O performance to some degree, but it doesn’t change the execution order.

After write/sync Binlog is done, the binlog has been written, so MySQL considers that the transaction has been committed and persisted (now, the binlog is ready to be sent to subscribers). Even if a database crashes, the transaction can still be recovered correctly after MySQL reboot. However, before this step, any operation failure may cause transaction rollback.

InnoDB commit is centered on memory commit such as killing locks, read views related to multiversion concurrency control release. MySQL believes that no errors occur in this step — once an error really occurs, the database will crash — MySQL itself cannot handle the crash. This step does not have any logic that causes transaction rollback. In terms of program operations, only after this step is completed, the changes caused by the transaction can be shown through the API or queries at the client-side.

The reason why the problem may occur is that the binlog is sent first, and then db commit is done. We use query retries to fix this issue.

Q： When it comes to multi-table queries, sometimes, why some tables cannot get data?

Master databases are chosen in the following scenarios:

Q: How can we remove network traffic? A: